ZENworks Configuration Management generally receives Linux Imaging Updates a few times a year.
These updates may include an Updated Linux Kernel, Updated Vendor Drivers, and New Vendor Drivers.
After Applying any General ZCM update or an Imaging Update, it is recommended to re-apply the Tuxera Driver.
Devices with a BIOS instead of UEFI (Generally Older Devices) will be delivered an older 32-bit Version of Linux.
Devices with UEFI (Generally this includes devices running in BIOS Emulation) will be delivered a more current 64-bit Version of Linux.
(Note: The Imaging Update Generally includes the specific Kernels included with the update.)
The version of LINUX a device downloads via PXE is determined by nvlnbp.sys in the SRV/TFTP folder on the PXE server.
The file is a small program that is downloaded and runs prior to loading any OS.
NVLNPB.SYS gathers the hardware details about a device, transmits them to the imaging server, and then waits for the PXE server to inform the device if there is imaging work to do as well as which PXE Boot Environment to download.

Verify The Linux Kernel by running the following command from the BASH prompt:  uname -r
As of the writing of the TID.....
The 32-bit Environment used Kernel 3.0.101-63-default
The 64-bit Environment used Kernel 4.4.21-69-default
The Kernel used by the 64-bit Environment will be updated over time in future ZCM updates.
The Kernel used by the 32-bit Environment will mostly likely NOT be updated due to the fact 32-bit versions of Linux no longer receive mainstream development.
Note: If newer hardware devices download 32-bit Linux instead of 64-bit Linux, verify that NVLNPB.SYS properly updated on the SRV/TFTP server.
It is a known issue that sometimes this file fails to update and that older versions of this file may incorrectly deliver the older 32-bit Linux to newer devices.
Verify the Version of the Tuxera Driver:  modinfo tntfs
The version of the Tuxera Driver must have the exact same version as the Linux Kernel.
If it does not, then it will not operate properly..
If the Tuxera TNTFS driver does now show as loaded or does not match the Linux Kernel, it should be re-applied via the ZCC.
(Note: Use of the Tuxera Driver to Create and Restore Images is highly recommended for performance as well as increased compatibility with Windows 10.
Hard Disk Detection/Interoperability Issues:
Verify the 64-bit Linux Distribution downloaded....The older 32-bit version of Linux will not support many newer drive types.
Verify the Disk Controller is not configured for RAID Mode within the BIOS/UEFI.
(A Device with a single driver may still have its controller set to RAID mode.)
Verify Network Card and Driver by running: hwinfo --netcard
This command will output the detected network card, the driver loaded for the card, and the network stack configuration.
If a driver is not being loaded for the network card, try https://support.microfocus.com/kb/doc.php?id=3421576
(Reminder: The 32-bit Version of Linux is not maintained, so the drivers included will likely not support newer NICs.) 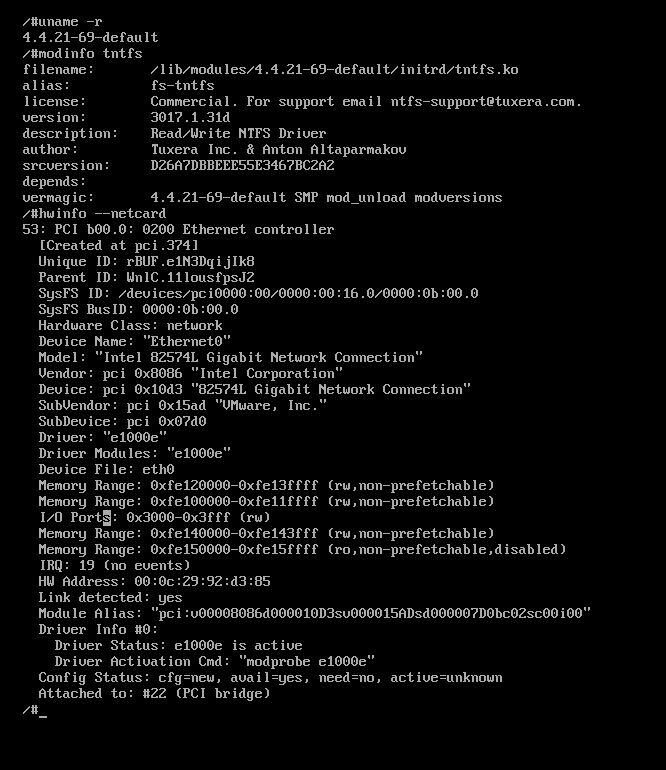