iPrint User Printers for Windows 8 and above 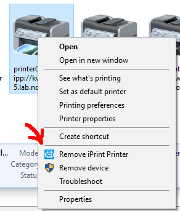