SSPR local database will not open
After restarting Tomcat on Linux server, SSPR  throws 5019 & 5052 errors on the login or configuration page. 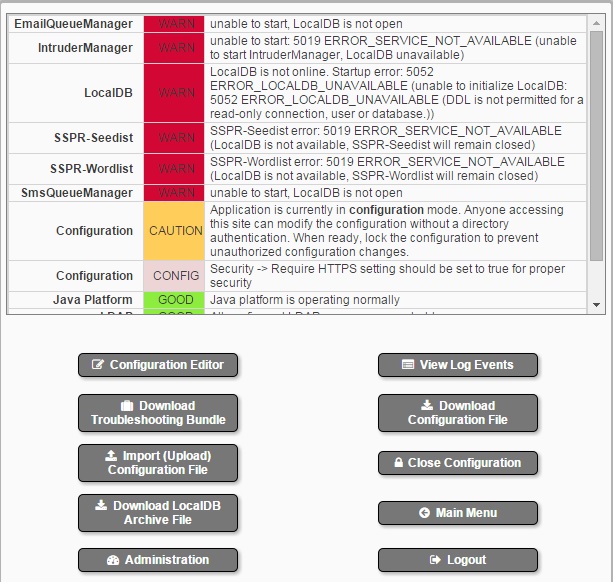 Option 1 (the easy fix)
Download the local database file in SSPR Configuration manager and then re-import it, instead of copying it manually.  The same is true for the Configuration file.  Using SSPR Configuration manager preserves file ownership.  Copying manually may not.
Option 2 (the manual fix)
Verify / Set the ownership permissions of the LocalDB database (var/opt/novell/tomcat7/webapps/sspr/WEB-INF/LocalDB/) to novlwww or novlua.   Make sure ownership and permissions for "LocalDB" matches those set for the other directories in the ../WEB-INF path, as shown:

To try and prevent this issue from occurring in the future, you may want to consider renaming the /etc/init.d/novell-tomcatX script, and replacing it with a simple script that echo's to use the startup and shutdown scripts.

Files were copied manually instead of through SSPR Configuration Manager. Tomcat was restarted with /etc/init.d/novell-tomcat7 restart when logged in as root, which changed the ownership of the database.
Problem occurred because ownership/permissions were changed when copying the LocalDB to or from the ../WEB-INF during an upgrade of SSPR.  When upgrading it is best to use the "Download LocalDB Archive" and "Import LocalDB Archive file" options from SSPR Configuration Manager.  If, instead, LocalDB is copied manually, use the command "cp -rp."  This will preserve permission and ownership assignments.
© Micro Focus. Please see Terms of Use applicable to this content.