This enhancements adds the following new functionality to the Compliance Auditor:

The below configuration will use the following names as examples:
User: Manager1
Group: Manager1 Compliance Audit
Group: Reporting-Audit


1. Create a new Group in Framework User Manager called 'Reporting-Audit'.  On the roles tab, add the following Module and Role: 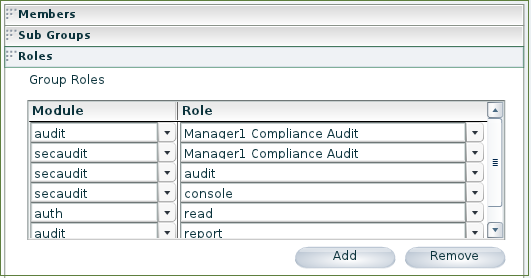 Note: 'Manager1 Compliance Audit' will NOT be in the drop down list, you'll need to manually type these into the corresponding roles.

When a user runs a command that meets your command risk criteria, it will only pull in that event when the audit rule pulls in (which in Unit is hourly.)  Managers will only see the 'risky' events (command risk greater than or equal to 5) pulled into the compliance auditor. All the other events, they can view via the reporting console, under their own report.  They won't have rights to change any of the reports but their own within the Reporting Console.  Managers can filter by date, etc with reporting.