iPrint printing fails with "Select the HP printer you want to use".

Installing an iPrint printer with the ShortInstallName feature with the HP Universal Print Driver version 5.3.1 or earlier results in a failure to print. This same failure will occur if the MS KB patches required by the iPrint client are not installed.  In both cases, instead of printing, the HP Find a Printer Default Dynamic Mode dialog window comes up.
The dialog window has some of the following text:
HP Universal Printing PCL 6
Preparing to print file <FilenameAndPath>
Select the HP printer you want to use.
Printers:
Recently Used Printers
Find a Printer 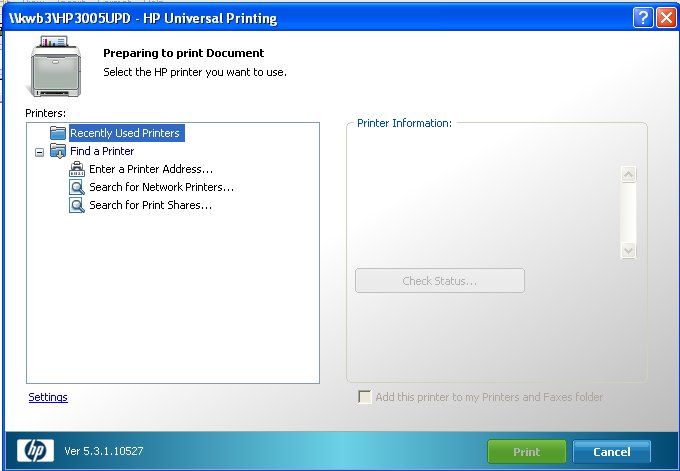 There are two causes to this problem, and therefore two fixes:
Resolution #1: Required Microsoft updates.
The following two Microsft KB Patches must be installed to avoid the above HP window to appear.  Note, these updates are not included in Microsoft's Service Pack 1 update:
http://support.microsoft.com/kb/2511290
http://support.microsoft.com/kb/2546651
Resolution #2:  ShortInstallName problem with earlier HP UPD versions:
Upgrade the HP Universal Print Driver to version 5.4 (released 01DEC2011).  This requires the administrator to upload the 5.4 HP UPD to the Novell Broker or Driver Store and associate the print driver to the printer agent.

If the above resolutions do not resolve the problem, below lists some troubleshooting ideas to find the cause.
1.  Physcial printer turned on?
This operation requires the workstation to be able to communicate to the physical printer.
2.  SNMP communication to printer
Is it possible the workstation is unable to communicate SNMP to the physical printer?  There are a few explanations for this:
To test the workstation's ability to communicate SNMP to the network printer, follow these steps:
3. Printer Driver Profiles?
If a printer driver profile for iPrint printer experiencing this problem is associated, was the "requires printer communication" box check during the creation of that Printer Driver Profile?  If this situation applies, delete the printer driver profile, create it again (but check that box during creation), re-assign the profile to the printer agent, and try again.
4. Latest HP UPD?
HP Univeral Printer Driver version 5.4 and earlier had issues.  Be sure to use the latest release.
5.  Latest iPrint Client?
Ensure the latest iPrint Client is being used:
https://download.novell.com/index.jsp?product_id=&search=Search&families=&keywords=nipp.exe&sort_by=&results_per_page=&x=0&y=0
© Micro Focus. Please see Terms of Use applicable to this content.