A problem with your mailbox has been encountered (Error 44)

After renaming the GroupWise ID for a user, they are not able to access their mailbox.  When they try to login, the user receives an error: 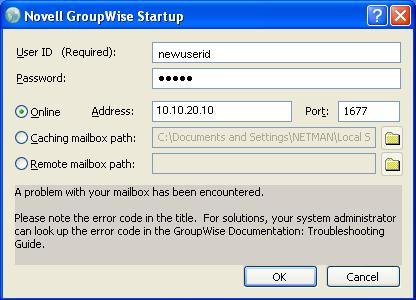 The problem is caused by a mixup in the user's verification record in the user database.
GWCheck needs to be run on this user with the following options:
1) Enter the post office name and path.
2) Select Analyze/Fix Databases.
3) For the Object Type select user and put the user's name in.
4) On the Databases tab select only the user database.
5) On the MISC tab enter VRFIXUP.
The VRFIXUP option is for fixing up incorrect or old user id's in the verification record.

This particular issue is encountered when there is contention for the particular userXXX.db file.  For example, if file backup application is backing up the file at the same time the name change is occurring, the name change will probably not complete correctly.