The WOL Packet itself will contain the MAC address of the target device repeated 16 times.
An actual WOL packet is displayed below:
Key parts of the packet to note are the following:
Destination: 192.168.1.255 which is the broadcast address for the device's subnet.
Protocal: WOL.  Ethereal identifies the packet as a WOL packet which helps indicate the packet is properly formed.
Packet Contents: The MAC address of the device is repeated precisely 16 times. 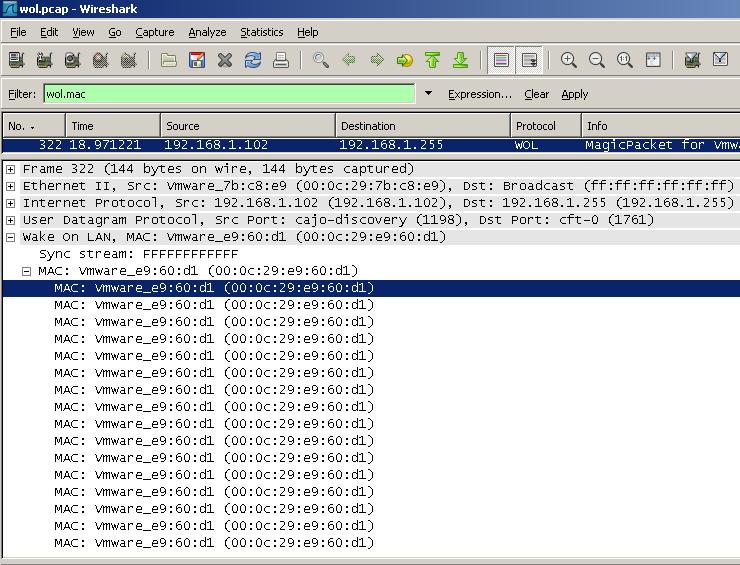 The overwhelming majority of WOL issues are traced to either the network infrastructure or workstation configuration.
If the WOL packet has been confirmed to have been transmitted properly by the server, but the target workstation does not appear to respond the next step in troubleshooting would be to confirm the packet arrives at the workstation.  To do this, turn on a packet capture utility on any device on the PC's subnet and take a trace while issuing a WOL command.  If the packet is not received by the device on the target workstation's subnet, then there is a configuration issue with the routers and/or switches which are blocking WOL subnet broadcasts.
Either reconfigure the routers and/or switches to permit WOL Subnet broadcasts or configure a WOL Proxy.
Please see TID#7001764 to learn how to configure a WOL Proxy.
If the packet reaches the target device, but the workstation is still not waking up, ensure the WOL is enabled in the BIOS of the computer.
Also, the NIC Driver in Windows may contain WOL settings that control if the device will respond to WOL packets.
In rare cases, updating or backdating drivers in Windows seems to effect whether or not the computer will respond to WOL packets.
The reason that a Windows Driver can effect WOL even when the PC is powered off and Windows is not running is that the Driver can actually configure settings on the NIC that will persist even when the computer is powered down.
To Allow WOL to Bring a device out of a Hibernate State, Perform the following Steps which may vary slightly depending on the Version of Windows:
1. On the target computer in Device Manager or in the network settings select the network card.
2. Click on: Properties
3. Click on the configure button of the network card.
4. Select the tab: Power management
5. Set a check mark at: Allow this device to bring the computer out of standby
6. Click on: OK
7. Continue to close all property pages.
(Note: The BIOS must support this feature as well and not all devices may support WOL in a hibernate state.)
© Micro Focus. Please see Terms of Use applicable to this content.