How To Set Up DHCP Failover on Open Enterprise Server

This document is for those wishing to setup DHCP failover on OES systems. 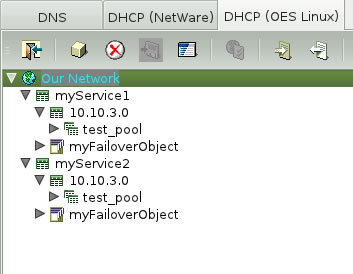 Note that in the above image, DHCP failover is already configured. The names chosen for this example were for simplicity.  The naming convention doesn't matter as long as they are identical under each service (the service names will vary). Be sure to name the failover objects to something meaningful. Later on, when monitoring logs, tracking down issues or watching the failover occur, the troubleshooting and monitoring will be much easier to follow. Each service object contains a subnet of 10.10.3.0, and a pool (called test_pool) that match each other. This is a necessary step for any pool to be included in the failover process. If it is not included in the failover process, then it isn't necessary. For example, if I include subnet 192.168.1.0 in myService2, I don't have to have it under myService1 if it is not to failover.
NOTE:  The two servers involve in the failover process must be at the same release level.  IE.  Do not mix OES 11 with OES 11.1 for example.  Make them both identical.
DNS/DHCP Management Console
Assuming the version of DNS/DHCP management console is Linux compatible (the latest versions are compatible), the following can be done:
© Micro Focus. Please see Terms of Use applicable to this content.