In the event that the GroupWise Windows client causes an exception (or ŌĆ£crashesŌĆØ), GroupWise generates a GroupWise Exception Report. This report contains information that is useful in analyzing the problem that the client is having so that it can be solved.

Each time an exception or crash occurs, a new report is appended to grpwise.rpt. If the file reaches 100 KB, the oldest reports (at the beginning of the file) are deleted.

The GroupWise Exception Report contains information such as the date and time the report was generated, the exception code, fault address, date of grpwise.exe, computer and username where the exception occurred, hardware and operating system information, process modules, raw stack dumps, and call stacks.

The grpwise.dmp file is the application dump this file is also found in the user's temp directory.

The Windows temp directory for your user can be found by going the properties of My Computer. Next, select the Advanced tab and then select the Environment Variables button. Here you should have a variable named TMP. Typically the value here is%USERPROFILE%\AppData\Local\Temp. Navagate to this folder using Windows explorer to find the button. TheGRPWISE.RPTand GRPWISE.DMPfiles should be here. 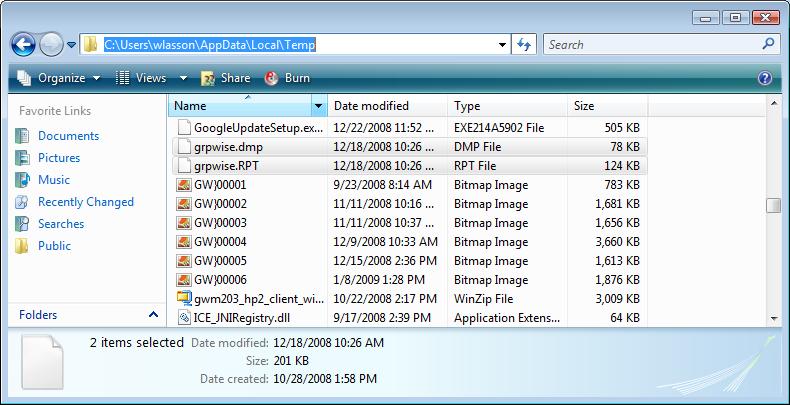